Where Do We Go From Here?: Black Power 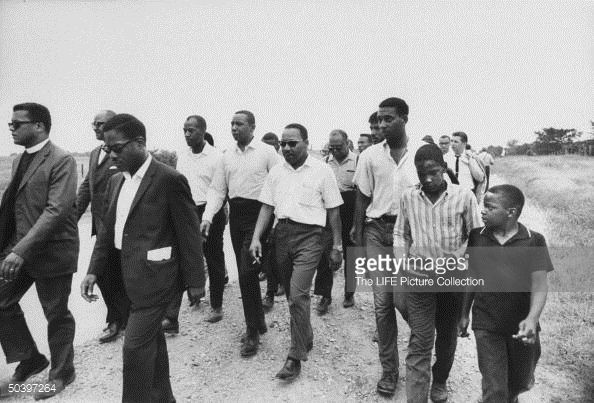 As the Civil Rights Movement (CRM) marched on, many black people felt the success was too slow and regional. The CRM had crushed Jim Crow in the south, but it had little effect on conditions in the ghettos of the north. Black people needed more than just the ability to dine and shop with whites. America needed a full plan of economic and political power redistribution.

The book tells the story of the Meredith Freedom March also known as the March Against Fear 1966. James Meredith, famous for integrating the University of Mississippi, began a march to encourage blacks to register to vote. Meredith did not want any large Civil Rights organizations on the march and only asked individuals to join. Meredith was shot, but not killed on June 6, 1966 the second day of the trek.

Most Civil Rights organizations knew if the march was stopped blacks in Mississippi would always be afraid to register to vote. Dr. King leader of the Southern Christian Leadership Conference (SCLC), Floyd McKissick of Conference of Racial Equality (CORE), and Stokley Carmichael of the Student Nonviolent Coordinating Committee and James Meredith held a meeting on continuing the march. They all agreed they had to continue the march as a joint effort of their various organizations. However, specifics needed to be agreed.

Both McKissick and Carmichael disagreed with King on non-violence in political struggle. All the men involved believed in personal self-defense. If a person was individually attacked for no reason, that person could fight and defend themselves. The point of difference was how should violence be used in demonstrations in self-defense. King held firmly that protesters should stay non-violent no matter what.

McKissick had frequently used the Deacons for Defense as security in protests. Carmichael had begun to train his followers in firearms if non-violent resistance proved not to work. So both parties believed that the movement might be forced to turn violent.

King was against having any armed guards on the march. If the march turned violent the mass of black America would not be ready for the repercussions. White supremacist would use any violence from blacks as an excuse to unleash a wave of violence unprecedented in the USA. Previous attempts at black armed resistance have ended in mass slaughter.

Non-violence was also needed to keep the moral high ground. King wanted to prove the violence displayed by the south was unwarranted. King believed the masses of white America were altruistic and if they realized the level of violence black America was under they would advocate for Civil Rights. Carmichael especially didn’t believe in the virtue of white America.

In the end, King agreed to allow the Deacons of Defense to guard marchers. Carmichael and McKissick had to agree they would not retaliate unless armed civilians threatened the lives of marchers. No retaliation would happen against law enforcement.

The SCLC had always been integrated and would continue to be integrated. King reminded the others how many whites had died in the movement. It would be disgraceful to their memory to close the door now.

King understood what Carmichael’s intentions were. It was important that black run their organizations to build confidence in themselves and build leadership experience. Therefore, King hoped that whites would understand the importance of taking a backseat in leadership. Blacks needed to realize they could save themselves. If whites have the leadership roles blacks will continue to feel helpless.

King was able to get McKissick and Carmichael to agree to march with whites in the end.

The last point of contention was the slogan of the march. The SCLC faction wanted “Freedom Now.” The CORE/SNCC faction wanted “Black Power.” The slogan “Black Power” was too divisive for King to support. It could be interpreted as a call to violence, and it would also alienate white allies.

Black Power could mean different things to different people. Yet its meaning centered around three points.

The unyielding boot of white power created the need for the term black power. Many black people have been frustrated by the slow pace of progress and have retaliated by creating a pungent slogan. These black people have lost faith in the fundamental and altruistic nature of American principles.

The call for separatism from the slogan “Black Power” would cause a consolidation of resources. It would cause black people to pool their talent and money to create a separate economy. King talked at length on cooperative economics which most term Ujamaa currently. The SCLC used the black-owned Tri-state bank to further economic goals in the black community.

The point of difference between King and Carmichael was the idea the Ujamaa would be enough to build economic stability in the black community. King supported many anti-poverty and wealth redistribution initiatives. The A. Philip Randolph Freedom Budget was explicitly mentioned in this book. Ultimately, black people could not build a strong economy alone. No ethnic group in America built an economy by separating.

The call to psychological manhood is essential to black liberation. No law or presidential decree will replace a deep unyielding sense of self-reliance. An intimate knowledge of black history will aid in building self-respect. Blacks would also need to start rejecting European standards of behavior and dress. King applauded the use of African aesthetic in clothing and culture. It is important for black people not to be ashamed of the part of their heritage that was different.

The disagreement came in the idea that blacks were or should be wholly African. King said that the natural state of an African-American made him partly African and partly American. Understanding himself from a dual perspective will be more advantageous than a singular. The dual perspective will also help black people feel at peace with the country they live and help build an integrated America.

Ultimately, King supported a Gandhian, non-violent, multi-racial freedom movement. Nothing short would work. America is currently at a crossroads and there is no time for impracticality. Nihilistic separatism will only exacerbate the problem.