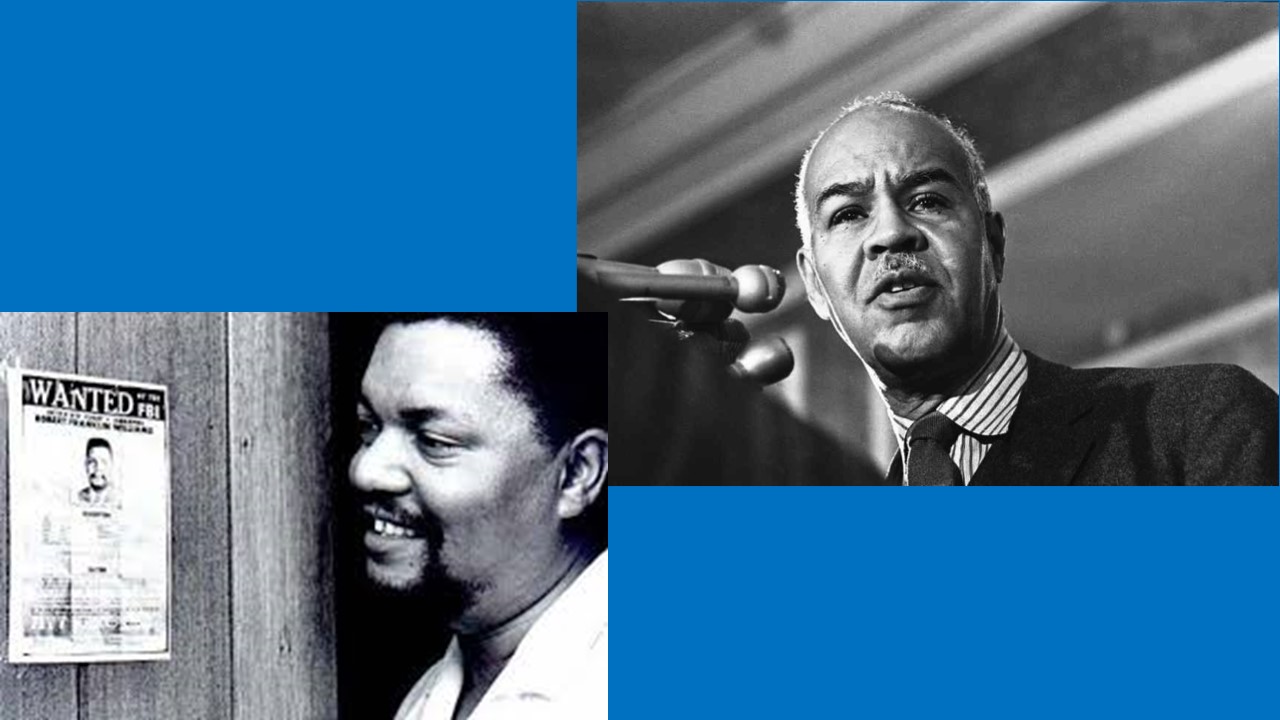 Two legal cases would lead Robert Williams to create the first school of Black Militancy in the Civil Rights era. The first case was against Brodus F. Shaw. He was a White man who kicked a Black maid, Georgia Davis White, down a flight of stairs who disturbed his sleep. Once Georgia White pressed charges against Shaw, racist began a smear campaign to discredit Mrs. White. All levels of state government were involved in her smearing. The North Carolina Attorney General provided investigators, free of charge, to find dirt on White. The investigation discovered that Mrs. White did not report $4.00 in earnings two years before she applied for unemployment. Local authorities arrested her.

The second case was the assault of Mary Ruth Reed by Lewis Medlin. Medlin came to Reed’s house drunk and attempted to force his way in to rape her. Reed was there alone with children because her husband was at work. She was also several months pregnant at the time. She ran with her four-year-old out the back door. Medlin gave chase and caught Reed. Her four-year-old son struck Medlin in the back with a stick to allow his mother to escape. They found refuge in the house of a white neighbor.

The Blacks of Monroe did not believe the government would protect these women. A Black lynch mob formed to seek revenge on the perpetrators. Robert Williams stopped the lynch mob from taking the law into their own hands. He told the crowd he could use his connections in the NAACP and the Committee to Confront Racial Injustice (CCRI) to get two convictions. Of the two organizations, only the CCRI sent lawyers.

May 5, 1959, both the Shaw and Medlin case went to court. Shaw, the man who pushed the maid down the flight of stairs, got his charges dropped even though he didn’t show up to court. Medlin’s defense team used the idea that a White man would never leave a White woman for a Black woman to save him. Medlin admitted to going to Reed’s house while intoxicated but never said he intended to rape her. Reed even had the White neighbor corroborate her version of events. In the end, none of it mattered. Medlin was found not guilty of all charges.

The Black women of Monroe were furious. Not only was there no justice dispensed on those that assaulted these women, but the court showed that there would be no consequences for their attacks. It was now open season on Black women. One woman told Williams this was all his fault. If he had let the lynch mob form, at least these women would have received some justice.

Right after Monroe’s Black women chastised Williams, he had to give an interview to United Press International. Monroe had made national headlines due to the Kissing Case a year prior. Williams is asked to share his thought on losing both cases. He explains that there are no laws to protect the Blacks of North Carolina. Due to the complete breakdown of law, Blacks would have to meet violence with violence going forward. They would meet lynching with lynching.

It goes without saying that his statement angered many in the NAACP. The head of the NAACP Roy Wilkins asked Robert Williams if he was quoted correctly. Williams replied in the affirmative and said he still stood by his statements. He clarified he was speaking for himself and not the NAACP. Wilkins explained that it does matter how he meant his words; the public would take it as an NAACP statement. Wilkins then suspended Williams. In defiance, Williams told Wilkins the NAACP hadn’t done anything to help Monroe Blacks anyway.

Thus began the first push for militancy in the Civil Rights Movement. Roy Wilkins distanced himself from Robert Williams in subsequent press conferences. Robert Williams clarifies his position at the same time. Williams makes clear he did not want vengeful violence against Whites. He only supports violence as a means of self-defense. Law and order had broken down in the rural south. Self-defense was the only way to ensure the safety of themselves and their families. Black Militancy is not rooted in hate for White people, but love for self and community. The Blacks of Monroe’s need to defend themselves was no different than the motivation of the colonists to protect themselves from British oppression.

The 1959 NAACP convention held July 13 – 19th held the hearing on Williams’s suspension. The issue was contentious. It caused a divide between the national and local leaders. The national leaders were afraid a militant stance could hurt their ability to get funding. If public opinion falls, not only would they lose funding, they would also have a harder time winning cases. The position of non-violence was the most politically pragmatic.

The local leaders felt the NAACP did not send enough aid to local cases that would not get national headlines. They were left to fend for themselves. Besides, even when they won civil rights cases, it often didn’t mean policy changed locally. There had been little progress on school integration since winning Brown v Board, in 1954. The NAACP was unable to improve their lives, and people questioned if the national office was inept or unconcerned.

Due to the NAACP national not getting tangible results, many were looking for alternative methods. One was Dr. King’s Non-Violent Direct Action. This method required breaking unjust laws. The NAACP opposed this method because they brought on unwinnable cases. The NAACP wanted to argue cases to the Supreme Court to force them to change the law. If the defendant knowingly broke the law, the NAACP could do nothing to win the case.

The second method was Robert William’s Black self-defense. Many that opposed the national office also supported self-defense. Others felt even self-defense could lead to mass slaughter. So the opposition to Roy Wilkins was not solidified. Various opponents had different agendas that reduced the opposition’s ability to build enough delegates to oppose the suspension. Because the opposition unified, they were able to distribute a pamphlet titled “The single issue in Robert Williams case.” The pamphlet framed Robert Williams as a case of mob violence versus legal action. The booklet portrayed Williams as a hot-head, leading Blacks in Monroe to annihilation. Even Martin Luther King spoke against Williams, further dividing opposition to Wilkins.

Robert Williams still had a broad base of support. It was also crucial that Roy Wilkins not only win the vote but win overwhelmingly to show benefactors that the organization was united. The delegates got together and decided on a compromise. Robert Williams’s suspension would be upheld 781 – 0, but the NAACP would also have to create a statement affirming the individual right to self-defense.

Two years later, during the seventh anniversary of Brown v Board of education (May 17, 1961), the NAACP held a rally in Harlem. Due to many of Robert Williams’s fundraising activities and advocacy for “The Kissing Case,” Harlem was home base of support for him. When Roy Wilkins took the stage, many in the crowd booed and jeered, demanding Robert Williams speak. Daisy Bates even took the podium to calm the crowd down. They shouted her down also. Finally, they found Robert Williams, who was in attendance and had him take the stage. From his impromptu speech, this was the most notable line: “Better to live upright for 30 seconds than 1000 years crawling”. The crowd went wild and carried him off on their shoulders. Williams’s integrity and tenacity built a base of support that all the lawyers at the NAACP could only wish.