Michaux: The Father of Churches 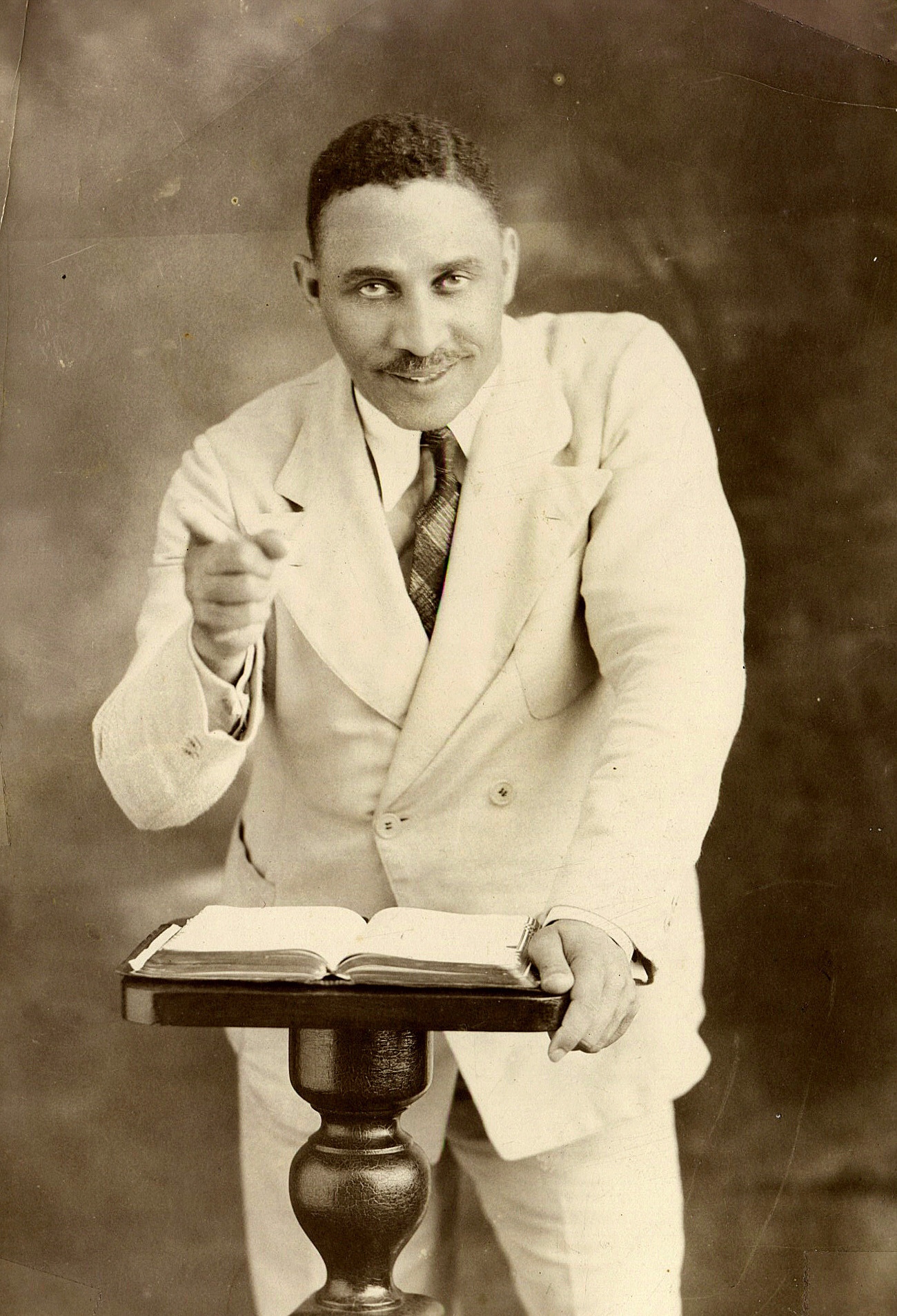 In Newport News, VA, a baby was born on November 7, 1884. The father was of mixed Black and Jewish Ancestry. He wants the baby to be named Solomon. The mother of Black and Native American parentage, wants the baby to be named Lightfoot. They decided on the name Lightfoot Solomon Michaux. The baby was born with a caul, a membrane resembling a veil covering his face. A caul signifies the baby will grow up to be a man of prominence.

John, the father, was a fantastic patriarch for the 1880s. He descended from a Jewish man that immigrated to Richmond before the Civil War. Due to his father coming from a line of merchants John opened a store. Solomon Michaux helped his father run the store and opened his store later in life. However, Michaux had a creative side his father did not have. He decides to open a dancing school as his second venture.

It is through his dancing school that he met his lovely wife. Mary Eliza Pauline was a student at said school and found Solomon to be quite handsome and charismatic. Their relationship began when he saw Mary crying outside the house of her then lover. Solomon felt sorry for her and made a deal. If she agreed to be in a monogamous relationship with him, they could live together. The couple will never have biological children but will adopt a daughter in the 1950s named Ieeda (Aeeda) Martin. The girl was an Eskimo from Alaska.

Mary’s origins were always questionable. She was orphaned at an early age and lived in a room above Gresham’s Bar in the Red Light District. According to the history of the Church of God, she served as a missionary attempting to save the souls of those in the Red Light District. Most people in town believed her to be a prostitute. One of the people believed the rumor was Solomon’s father, John and this rumor led to animosity between Mary and the rest of the Michaux’s. Mary was also seven to fifteen years older, her husband. Despite her flaws, she was extremely religious and encouraged her husband to join St. Timothy Church of Christ (Holiness).

Solomon and John landed a contract to supply the local harbor with vegetables. Part of the reason he won the deal was he obtained green peas out of seasons. Little did the government know he was taking dry peas, soaking them in water and green food coloring. Ultimately, the venture was profitable, and he was able to build a business network.

Mary sees the town of Hopewell as a lost city. As the old testament towns of old, licentiousness has overcome the city. The new army base and factory caused a population explosion. More people were at the gambling hall than the church. Mary wants Solomon to build a new church to save the people of Hopewell.

John likes the idea of Solomon preaching and offered to pay for Baptist seminary. When Mary hears this, she hits the roof. Mary wanted Solomon’s church to be pure, and Baptist preachers were far from pure. Many of them propositioned her even though she was married. Solomon decided to side with his wife in the argument and started the church from a tent. He would find others to preach.

Solomon starts a church in 1917 with a land grant from the DuPont corporation. He built a white frame structure and found visiting elders to preach. The church was called Everybody’s Mission. One of the guest preachers was a man named Brother Diaz. During the Diaz service, a vision comes to the pastor. Diaz tells the congregation that Solomon Michaux was destined to lead them.

Solomon began what would later be known as the Gospel Spreading Church in 1919 from a tent in Newport News. He was able to get over 150 members in three months. By November, he was able to buy the current building on 19th and Jefferson. He would obtain the Lincoln Theater in this town in 1929. The congregation wouldn’t stop growing and a second church began in Hampton, Spring of 1922.

The church had a very charismatic style known for vibrant songs and captivating preaching. The members were also not shy about proclaiming to the world their love for Jesus. In October 1922, Michaux was arrested for leading a parade in the early morning that awoke the residents of Newport News. He was convicted and ordered to pay a fine or go to jail. Michaux chose jail. The judge realizing Michaux would be considered a martyr ordered his car to the confiscated to pay the $25 fine. The judge offered to give Michaux the excess from the sale of the vehicle. Michaux refused.

After World War 1, coastal Virginia experiences an economic downturn. Michaux responds by creating the “Common Plan.” Members that had work would pay into a fund; in return, unemployed members would do basic chores and menial tasks for the paying members. The Common Plan helped some members stay in Virginia until the economy turned around. Others left to find work in different states.

The first group left in 1924 left for the coal mines in Edenborn, Pennsylvania close to Pittsburgh. A church was established in this area in 1930. The group in Pennsylvania expanded and a Gospel Spreading Church was also founded in Philadelphia in 1935.

The second group left to find work in Baltimore with a church established in 1923. Another church was created in the Baltimore suburb of Essex, MD in 1924. The Essex church attracted a white family later found to be part of the Ku Klux Klan. They were attracted to the charismatic and patriotic preaching style of Solomon Michaux. The white family was so impressed with the sermon they ask Solomon Michaux to give a lecture at their home church.

Going to a white church with a heavy KKK presence did give Michaux pause, but he saw it as part of his mission. He agrees to speak at the white church because he feels G-d will protect him from any harm. The church enjoys his sermon and from then on whites regularly attend Michaux’s Essex Church.

In 1926, Virginia passed the segregation laws, commonly known as Jim Crow. He invited his mixed congregation to worship in Virginia. The multi-racial church service violated state law, and Michaux was arrested. He had to pay a fine as punishment, but he continues to speak out against segregated churches. The Church of God had integrated services in any state that would allow them. He held firm to the belief that G-d’s law supersedes any state or national law. In G-d’s house, there was no segregation.

Washington, DC of 1928 was a prime location for a new church, so one was founded on Georgia Ave. A large black migrant population that was extremely poor entered DC. The affluent black community already in the district ostracized the newcomers. Michaux understands many of the new arrivals might not attend church because they feel they can’t dress well enough. To service these people, he decides on creating a radio ministry.

WJSV was one of the local radio stations. It was owned by James Vance who was part of the KKK and published their newspaper. Vance agrees to broadcast from a storefront location in DC, and so began the Radio Church of God in 1929.

The broadcast centered around music, even the sermons had a beat to them. The song the show is most famous for is “Happy Am I.” That is why Michaux is known as the “Happy am I, Preacher.”

Once Michaux became a household name, he hired tutors to teach him theology and other biblical concepts. He had limited literacy, so often the tutors would read to him. Using his newfound knowledge, he was able to build a biblical philosophy that mixed “New Thought” and the “Social Gospel” while being patriotic. The sermons were still simple enough for the average person to understand. Even when political topics were discussed, they were done simplistically.

Michaux not only established himself as a prophet but felt the need to expose false prophets. Father Divine was one of these false profits preaching a non-biblical gospel. Divine told his congregants that sex was wrong even within the confines of marriage. He also allowed his followers to refer to him as G-d on earth. Michaux had many revivals in New York at Father Divine’s house and headquarters Rockland Palace October 1934. Denouncing Divine was the focus of the Madison Square Garden Revival on October 7, 1934. Two of Divine’s so-called “Angels” testified against him. The Angels accused Divine of taking all the wages of congregants. A Gospel Spreading Church established a church in New York in 1934. The church’s goal was to stop the spread of Divine’s message.

The fame from radio opened more avenues for Michaux, leading to many multi-racial revivals in Washington, DC, and Pennsylvania. The annual baptism at Griffith Stadium etched Michaux in the minds and hearts of America. A documentary film was created on his life in 1942 “We’ve Come a Long, Long Way.”

Now the notoriety did not come without backlash. Michaux was known for attacking more traditional denominations. The Interdenominational Ministries Union started accusing Michaux’s church with being a cult. Michaux began to raise money to build a monument and farmers co-op in Williamsburg, VA. Many people accused him of misappropriating funds. Even though the charges were never proved in court, they did diminish his credibility. In 1938, CBS canceled the show, but Michaux broadcast independently from Washington, DC until he dies. Making The Radio Church of God the longest running radio show in history.

One thought on “Michaux: The Father of Churches”