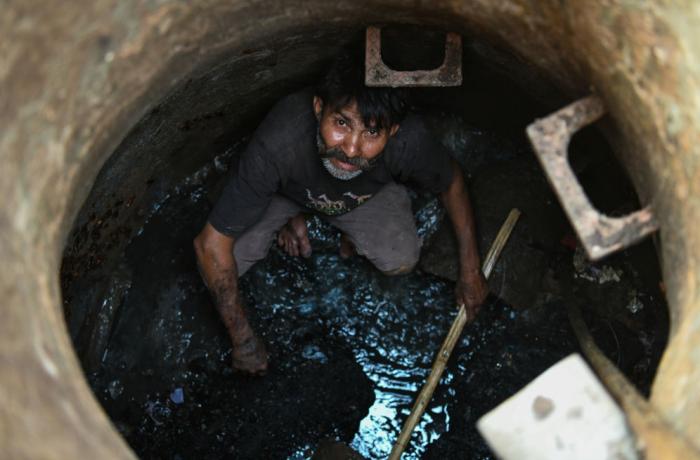 When most social analysts study India, they see the chief division as religion, Hindu vs. Muslim. However, it is also essential to understand caste divisions. These divisions are recognized by those that practice all the religions of India. Those in the lower caste, namely: primitive tribes, criminal tribes, and untouchables make up 60% of the population or 79.5 million people. Since the caste system is disenfranchising a larger number of people than the population of Japan, one cannot ignore the division.

As stated early, the lower or avarna castes: primitive tribes, criminal tribes, and the untouchables are unique on the subcontinent. Primitive tribes exist in the wilderness of India, living a hunter-gatherer lifestyle. The criminal tribes earn their name by raiding neighboring villages and committing assisinations. One clan called the Pindharies can muster up to 20,000 in Calvary. The clan of hired assassins is called, The Thugs. The government considers their acts legitimate business, and they pay taxes. Untouchables live observing Hindu culture and law. However, touching them would pollute a Hindu and require him to be cleansed at a temple.

Of the three avarna castes, Untouchables are the only group that has a social condition that cannot be changed. If a member of the primitive or criminal tribes decides to leave his group and enter Hindu society, they would be welcomed with open arms. An Untouchable could become the leader in his industry and would still cause a Hindu to be polluted. Therefore, Untouchable has a unique struggle in society. Ambedkar uses the analogy that Hindus relate to untouchables as a man relates to his shoes. Untouchables are just a means to an end.

The idea of caste causes separation in marriage, dining, and occupation. The specifics of the Caste System has changed as evidenced by records of foreign travelers to India. At the time of publishing of the treatise, Gandhi wanted Untouchables added to the least powerful caste, Shudra (Laborer). The Untouchables would not have permission to change occupations. The only difference would be, they would not pollute a person of a higher caste.

Aside from the fact that Hinduism promotes the caste system, the religion is also invalid because the highest form of religious experience is trance. It is absurd to think an abnormal psychological condition produced by artificial means is the sign of enlightenment. Trance (Samadhi) was just another aspect of Hindu metaphysics that prevented the population from moving toward rationalism. It is rationalism that will advance society and end discrimination.

Caste is a social order made sacred by the religion of Hinduism and enforced by Hindu law. The laws supporting caste are as old as antiquity, but they were rarely invoked. The laws supporting caste ended in 1850 with the Caste Disabilities Removal Act. The Caste system stayed intact despite not having legal bases. The fact the caste system survived without legal undergirding shows that religion served as the caste system’s base.

Hinduism was exceptionally robust in enforcing caste because it was a religion of a book without a prophet. Ambedkar defines his position by referencing Professor Max Muller’s work on classifying religions as natural vs. revealed. In the natural category, he groups the religion of aboriginal people such as Iroquois. The natural faiths classify objects and people as sacred or taboo and don’t use a personified being as supreme. The revealed religions are those that have a book revealed by a prophet. In the revealed camp, one would find most of the Abrahamic religions and Zoroastrianism. The Vedas are Hinduism holy book, but a prophet did not reveal them to the worshipers. Therefore the credibility of the book cannot be questioned by attacking the character or historical validity of a prophet.

The Caste System occupied a scared space in Hinduism. No other religion deemed any social order sacred. There have been those that have fought against the system such as the Buddha and King Vishvamitra. Yet the idea has persisted. Most religions consider economic activity outside the purview of religion. Combining religious/ social and economic disadvantage was a dangerous combination.

Ambedkar objected to Gandhi’s proportion that caste was the ideal form of society. In fact, caste is not founded on the cooperation of various professions, but their antagonism and class war. To justify his position, Ambedkar uses allegories from sacred Hindu texts that show that Kshatriya and Brahmin had a bloody civil war over the right to perform sacrifices. Bloody conflict is the inevitable result of the Caste System.

One thought on “Essay on Untouchability II: Social Undergirding of Caste”