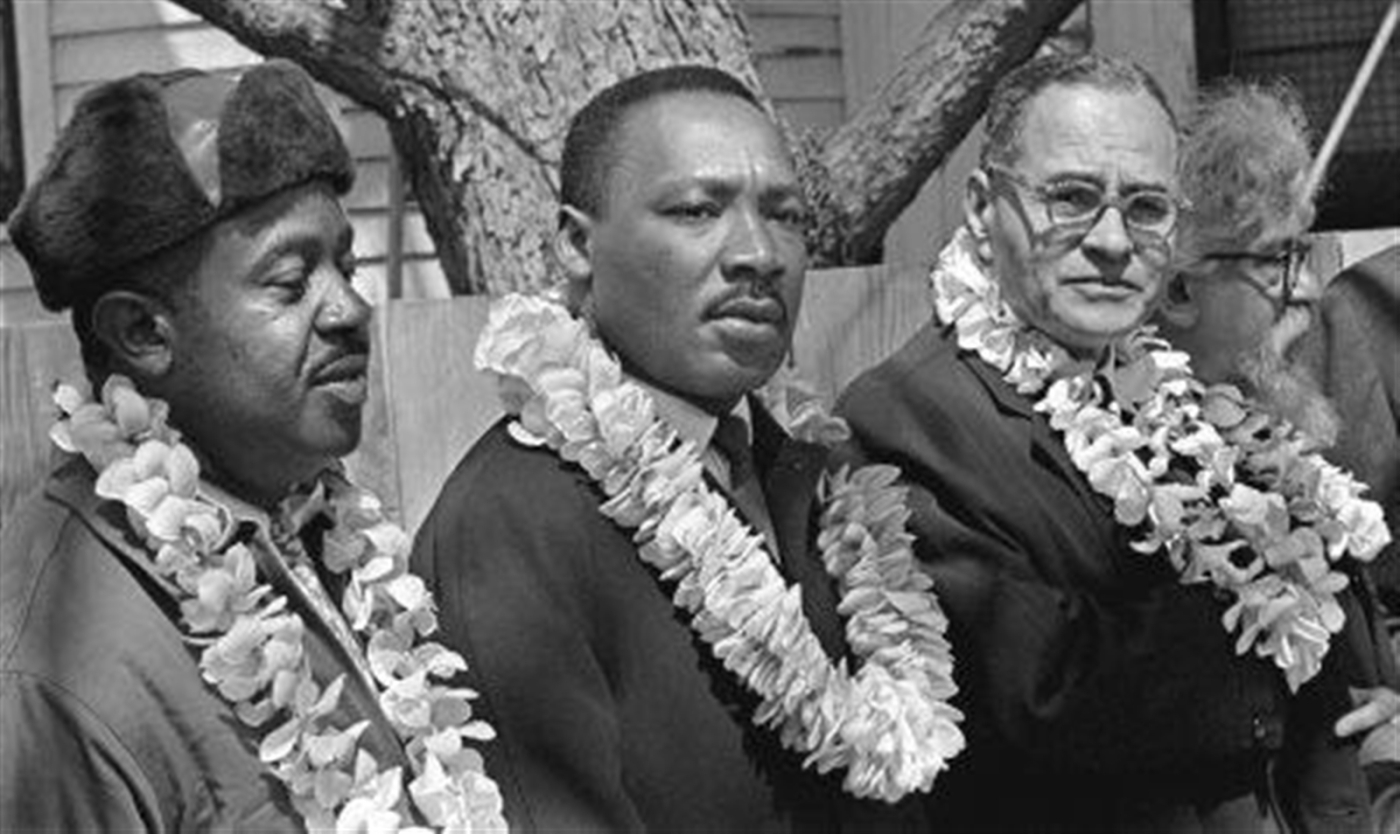 Dr. King’s philosophy is centered in the Green Meme as described by Clare Graves, Don Beck, and his students. The Green Meme is characterized by building cross-cultural bridges, working to develop a social safety net, and ending war. The Green meme casts aside old lines that divide between race, religion, and ethnicity to build a new coalition. Building coalitions were the center of King’s life.

King’s version of Civil Disobedience was called Non-Violent Direct Action. In this method, people would refuse to comply with unjust laws. By mass disobedience, protesters would flood the local judicial system. Once the jails were filled, and the courts were backed up, those in power would have to free the prisoners or expunge the cases. On the grander scale politicians locally and nationally would see how many voters were willing to be jailed would be motivated to enact policy initiatives. The groundswell of support would motivate the politicians to adopt more liberal stances. The change in popular opinion along with progressive legislation would end segregation law.

Non-Violent Direct Action was different than the method used by the NAACP which was court action. An example of NAACP methodology would be Thurgood Marshall’s strategy in Brown v Board. Marshall would find state-level cases in which state law forbid someone from going to a quality school due to race. The client had to exceed the standards of admission and conform to mainstream standards of respectability. Not only would Marshall bring a strong case to the court, but he would also make sure the local paper covered the case. Once enough precedents were created on a state level, he was able to present Brown v Board to the Supreme Court.

NAACP campaigns did work. However, the only people involved were lawyers and clients. Both usually came from the more aristocratic class of black America. So even if an average black person benefited from the abolition of the law, they would feel like they were saved, not that they had affected change in their life. Also, if the only people that are defended by the NAACP were relatively aristocratic, there would be resentment in the masses of black people. The NAACP method succeeded in changing law, but it did not create a new community.

The other method was armed rebellion. Insurrection had never been done on a large scale by black Americans. The reason is that a minority could not have beat what is the best military in the world by the 1950s. Most black people would never even attempt insurrection because there is little likelihood of success. An attempt would end in a quixotic story for black people and another excuse to discriminate for whites. In the end we would have an even more divided nation.

King’s method could bring together many factions of the black liberation struggle and white America. Because it is based on an action and not a philosophy, people with different belief systems could participate. Also, people of different ages, education levels, regions of the country could come together for the cause. Even if one did not want to participate, they could respect the protester’s sacrifice. The peaceful protest would also challenge commonly held negative stereotypes of black people. In the end, there would be a movement led by black people that proves and supplements their dignity and self-reliance.

Challenging authority is a marker of the Green Meme. Peaceful protest directed at the institutions of injustice is a healthy way to pressure those in power. His demonstrations are still seen in a positive light today because they targeted at the institution causing the suffering. The bus was segregated, so the boycott was directed at the bus company. The city of Memphis wouldn’t pay black garbage workers equally, so there was a march to city hall. A study of King could prevent current activists from protesting obscure ideas in places not directly responsible.

Most in the mainstream media concentrate on King’s ability to find white allies. These connections are not to be discredited. Stanley Levison, ex-communist turned humanist, was instrumental in early funding. The coalitions built with Catholic, Jewish, and white Protestants were vital in spreading King’s message. But undoubtedly his most important collaboration was with John Kennedy and Lyndon B Johnson. Through them, he was able to enact the most important civil rights legislation for housing, voting, and travel.

Few people know of King’s effort to connect with more radical factions of the black liberation struggle. The most high profile of these instances was his ability to have a joint march with the Congress of Racial Equality and the Student Non-violent Coordinating Committee. Both organizations wanted armed guards on the march. King acquiesced because he understood the importance of unity. The March Against Fear was a success.

An even more obscure instance of King’s ability to build bridges was with the Memphis Invaders. The Invaders were a local black liberation organization analogous to the Black Panthers. They got the name Invaders because they were accused of taking over the Student Union at LeMoyne – Owen College. They were also accused of starting the riot that ended Dr. King’s first march through Memphis. When King returned to Memphis he understood he needed the Invaders on his side.

He got the Invaders to agree to be marshals in the non-violent march. By making them responsible for keeping the peace, he removed an element of possible violence. Remember the SCLC did not consent to involve the Invaders. Most members of King’s organization saw the Invaders as street thugs. King saw them as young men trying to find themselves. The Invaders are still active in the community today, and they credit their continued success to their mentorship by Dr. King.

Another aspect of the Green Meme is being anti-war, and King was an exemplar in the peace movement. He first came out against the war in a 1967 speech in Riverside Church. His involvement in the Center for New Politics and The Poor Peoples Campaign provided a vehicle to get this message to the masses. To prove his point, he criticized those that praise his non-violent movement in the Dixie and support violence against the North Vietnamese. He understood that military expenditures deplete capital that could be used for public good.

His stance on the war, but him at odds with Lyndon Johnson and the Democratic Party. The Democrats had just signed the civil rights bill and were poised to do even more for the movement. Many, especially in the SCLC, wanted King not to take a stance on Vietnam. It took a generation even to get an audience with a president that was interested in helping. There was little King could do to stop the war, so there is no reason to risk the entire movement.

King stuck to principle and opposed the war. His anti-war stance led to people calling him a traitor and unpatriotic. It also gave many Democrats ammunition to turn Johnson on King. Ironically, exactly one year after the Riverside Church speech King was killed.

King centered his life around knocking down barriers of race and building a society based on love. Non-violence was a way of life that should permeate through the personal, community, and international relations. Love and Non-violence are a hallmark of a healthy version of the Green Meme. The Green Meme also challenges authority and traditional social structures. Peaceful protests are a healthy way to accomplish this goal. In the end, King built a more inclusive society.

One thought on “Was Dr. King Green Meme?”