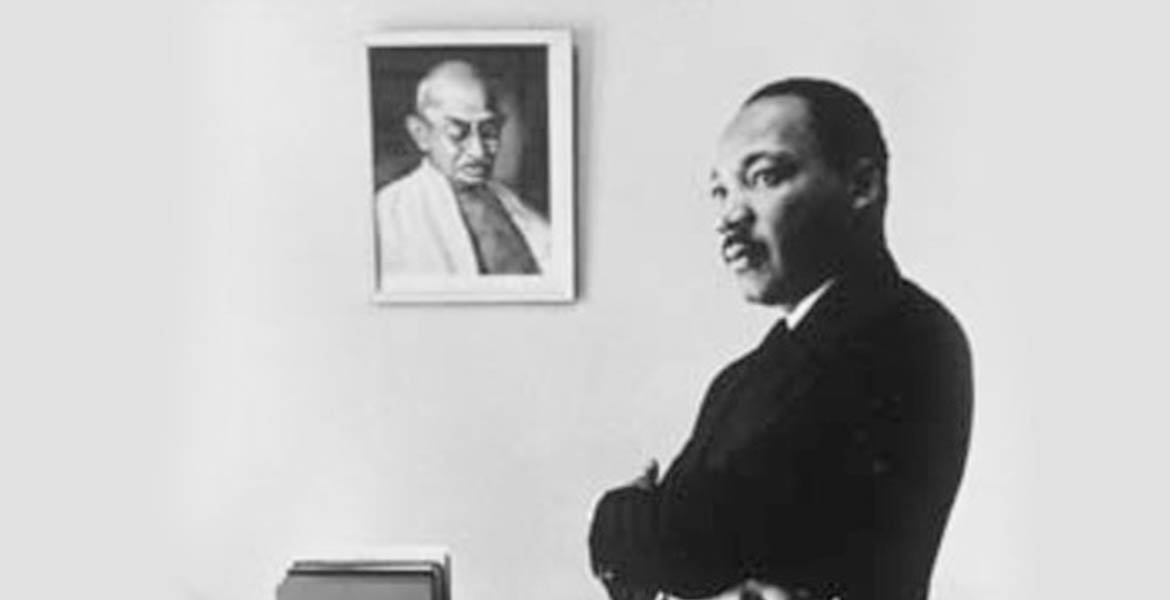 Dr. King saw Gandhi as a fellow Christian. Not because Gandhi was part of a church, Gandhi was Hindu. However, he did see Gandhi as a person that used love to conquer hate through non-violent resistance. He went as far as to say the bible verse “there are other sheep I must minister” (John 10:16) and “do even greater things than these” (John 14:12) included Gandhi. In a 1959 sermon, Dr. King said Gandhi was also a master of self-control.

Dr. King says that his first encounter with Gandhi’s teaching was a two years after the death of Gandhi in 1950. Dr. Mordecai Johnson gave the lecture while Dr. King was in seminary. At the time of the speech, Gandhi had already been assassinated. The address had such an effect on King he went out and bought six books on the subject. Some scholars say that Dr. Benjamin Mays introduced King to Gandhi’s work while an undergraduate. Dr. Mays had gone with a delegation of Christians to visit India and met Gandhi in 1935. However in the paper “My Journey to Non-violence” King credits Dr. Johnson for introducing him to Gandhi.

Prime Minister Nehru invited Dr. King to visit India in 1959. The Gandhi National Memorial Fund and the Quaker Center sponsored the trip. Dr. King arrived in India on February 10, 1959. He brought his wife Coretta and biographer L.D. Reddick for the month-long journey and exploration of non-violent resistance.

Upon leaving India, King calls on the United States and Soviet Russia to follow Gandhi’s example of non-violence and disarm. He also calls on India to disarm and become an example to the world. If India did disarm and some other country attacks, the world would rush to her defense, because she is a shining example of non-violence. His call for India to disarm shows how sincerely he believed in the concept of good will inevitably triumph over evil.

King’s view of Gandhi and his trip to India were recounted in the 1959 Palm Sunday sermon, a 1959 article for Ebony magazine, and a 1965 Independence Day sermon. According to King, Gandhi freed India without a gun drawn or a harsh word uttered. He gave a narrative of Gandhi’s life in the Palm Sunday sermon.

Gandhi began his journey when he was kicked off a train after buying a first class ticket in South Africa. The humiliation for being kicked off the train led him to organize Indians for equality. Gandhi gathered inspiration from the bible and Christian authors like Tolstoy. His campaigns in South Africa were so successful that those back home in India wanted his help.

In India, his campaign for equality began in 1922. This first campaign had to end because people in his movement became violent. King commends Gandhi for having the bravery to chastise members of his movement when they transgressed. He later restarted the campaign and protested the high taxes for salt with the Salt March.

In reality, the 1932 fast was to remove Parliamentary reservations for Dalits. Ambedkar had gone to England and secured The Communal Award ensuring Scheduled Castes and Tribes would have seats reserved for them in Parliament. Supporters were glad that England would ensure some Dalit representation. Gandhi wanted to ensure Hindus always held the majority in Parliament. If Dalit had a separate electorate, they could form a coalition with Muslims and weaken Hindu caste rule. Gandhi went on a fast to ensure the Hindu set aside included Dalits. It is unlikely a Dalit could win an election where most of the voters were caste Hindus, and their numbers would increase the number of seats Hindus had relative to Muslims. Ambedkar and Gandhi were able to reach a compromise in the Poona Pact. Gandhi broke his fast and Ambedkar received some reserved seating in Parliament.

King continues to praise Gandhi saying he achieved absolute self-discipline. According to King, Gandhi had no secrets, and his life was an open book. King obviously was not aware of the numerous sexual allegations against Gandhi. These allegations will not be known in the West until much later. However, someone deeply involved in Indian politics would have at least heard rumor of transgression. Arundhati Roy has written many books detailing the violations.

King also seems unaware that Ambedkar charged Gandhi of having different narratives in the three versions of his newspaper Harijan. The English version always advocated for the annihilation of caste, but the two versions in his native language advocate for keeping upper caste Hindus above Dalit, while removing rituals of purity when one is in contact with Dalits. King praised Gandhi for having a paper dedicated to Dalits.

While telling his story about his brief stint in Trivandrum, Kerala while in India, he tells the story about when he was called an untouchable. He was visiting a high school in the city that was comprised mostly of untouchables, and the principle introduced him as an untouchable from America. King was at first upset, but after reflection, he realized that he was, in fact, an untouchable, along with every other black man in America.

From the evidence I was able to gather, I am not convinced that Dr. King had a clear view of the Indian struggle and Gandhi’s role in it. He apparently knew little of Gandhi’s personal life. It is most likely that a carefully manufactured retelling of the Indian struggle through the eyes of Christian pre-determinism influenced King’s understanding. The idea that good will inevitably win over evil is pervasive throughout the Bible. All the people in King’s life that studied India were Christians with a background or career in theology. So, it can be easily seen that these people superimposed their beliefs on their retelling of the story. Dr. King was predisposed to believe the narrative because of his sincere belief in the Christian faith.

In reality, India had an armed struggle against the British that started in the 1850’s. By the 1940’s the Indian National Army was large and had carried out successful operations against the British in World War II. The English needed to concentrate on rebuilding after the war and did not have enough resources to suppress an armed rebellion. Gandhi came in at the right time to offer a transition of power that would allow for continued economic growth while not consuming British military resources. That does not mean blacks should form a resistance army to mimic the Indians. I present this evidence to show how fundamentally different what Gandhi accomplished was to what Dr. King accomplished.

King’s faith also led him to be humble and extend credit to Gandhi. In reality, the story of Gandhi had the same influence on King as the stories of rebellious Scottish chiefs had on the American founding fathers. Both gathered inspirations to fight tyranny from those that went before them. Both may have used previous struggles as a rough outline of what needed to be done to free their people. But to say that Gandhi was the inspiration or mastermind of the American Civil Rights movement is a step too far. King’s tactics and struggles were his own.

If Dr. King had been introduced to the philosophy of Ambedkar, he would not have given so much praise and credit to Gandhi. King also would not refer to Dalits as “Harijan” if he understood they prefer the term Dalit. He had a very limited view of the Dalit fight, but he saw the struggle against untouchability and racism as intertwined. If Dr. King understood Gandhi’s true feelings on untouchability, he would be highly critical.